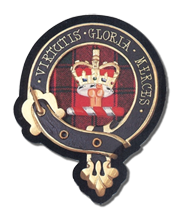 The Isle of Bute Surname Study:

One of the parallel studies we have been doing is more documentary research around the surnames of Clan Donnachaidh. Attached is a paper on research we have been doing on the Isle of Bute on the McConochy and Duncan surnames and their connections. This research is a great example of family history research, DNA testing, revisiting old research, searching for new records and discovering new things.

The Isle of Bute Surname study as pertaining to surnames of Clan Donnachaidh:

The Isle of Bute is a small island on the western edge of the Firth of Clyde in Western Scotland.  As with the lands of present day Scotland there has been a human presence on Bute from time immemorial.  The Donnachaidh DNA Project has been working to understand some of this human presence within a historical time period where we have remnants of records and documents to give us clues into the life and social structure of Bute.  As with most research locating actual documents and records that support and describe events of the past are difficult to find, and then must be carefully interpreted and validated along with other known historical records.

The Isle of Bute has been a place with families growing and expanding for millennium.  From late antiquity into the present historical time period the peoples of Bute had a language of use (Gaelic) with is own naming structure and rules.  This naming structure evolved to fit the needs of the culture and society of the time period of use.

One of the language families of western Scotland was Gaelic, and many place names and personalized names were of the Gaelic language. In regard to the Gaelic naming conventions, we would see a personal name usually followed by a descriptive identifier.  One Gaelic name that would be familiar to Clan Donnachaidh would be  “Donnchadh Reamhar” where Donnchadh would be a Gaelic personal name and Reamhar being the descriptive identifier that pertains to this particular person.  In the case of Donnchadh Reamhar the Gaelic “Reamhar” is thought to mean “Stout”.

One thing to remember in the naming pattern described above is that language was always in a state of flux, and over time with internal and external forces at play, conventions of usage changed.  As elsewhere in Gaelic Scotland the needs of the naming system evolved into a more elaborate naming structure due to many reasons such as population size, cultural and outside political pressures, etc.  We must remember that these structural changes did not happen all at once or on a magical date in history.  These naming conventions evolved at different rates and with much fluidity into the language systems of today.

The Gaelic names went through a two-part name structure before today’s three-part naming structure composed of a forename, middle name, and a surname.

Over time most languages were pressured by social and/or cultural changes related to trade and political power shifts as exampled by the Gaelic decline due to being supplanted by the English language.  We see this very much in Scotland with the old Gaelic names slowly being replaced with an English/Anglicized name.  Our Gaelic Donnchadh slowly evolved through a series of Gaelic forms such as Connachie/Conachy/Donnachie (with all the many spellings) into the final Anglicized form of Duncan.  If including the patronymic naming system the Mc/Mac prefixes meaning “son of” is gained, as in MacDonnachie, McConnachie.  This process was very fluid and spellings were generally phonetic.  The English speaker most probably had difficulty spelling what was heard with the various dialects and inflections of speech of the Gaelic names he was presented.

Now that I have described some language basics we move onto its pertinence to the DNA study on the Isle of Bute.

The study on Bute began because of the research done by many McConnaughey & McConaghy (including those of the multiple variant phonetic spellings) researchers in the United States and Ireland trying to find their ancestral homeland, the place of their emigrant ancestors.

One researcher Susan McConnaughey Hedeen in the United States has been a long time researcher into her family surname and the many McConnachie families.  She has documented her McConnaughey line back into Ulster, Ireland (McConaghy) with a family story that they may have immigrated from the Isle of Bute in the 1600’s and in the 1700’s to the American Colonies.

During the years of McConnaughey research, a Royal Charter issued by King James IV dated 1506 was located. This charter gave charters of land to five different men, on the Isle of Bute, bearing the surname McConechy as later Anglicized.  After this Charter came to light an alluring idea slowly developed…. could their McConnaughey ancestors have been part of this group of Bute McConechy men listed in this 1506 charter.

We had a historical document and family stories that gave circumstantial evidence of a possible McConnaughey connection to the Isle of Bute.  As the histories and land records of Bute were further researched it was found that the McConechy’s listed in the 1506 charter slowly started selling off the land they had received.  Some sold their land within a few generations and some passed the land down through centuries of descending McConechy sons.  It is thought that the last McConechy male living on the Isle of Bute died in about 1935.

From the DNA project perspective, we wanted to test known direct male line decedents of these Bute McConechy’s but we had not been able to identify and locate any.  We have tested a series of McConnachie men in Ireland and the United States, some carrying the above story of a possible Isle of Bute connection within their family histories.

The DNA testing results confirm that all the McConnaughey/McConachy men with the family story of a possible ancestry from the Isle of Bute do indeed match one another, showing a close family relationship.  But not having any known Bute McConechy men to compare to, we were still short of either confirming or disproving this Isle of Bute McConnachie story.

A very interesting outcome of the McConnaughey and McConnachie testing is that the results revealed strong matches to all the men in Duncan Group ‘B’ of the project.  Duncan Group ‘B’ is comprised of men from only America.   The men in Duncan group ‘B’ do not have documented ancestries out side of America.  Now that we have these genetic matches between the Duncan and McConnachie surnames evoked the question, “ what does that mean?”

The next phase of our research centered on finding Duncan men living on the Isle of Bute to DNA test.  In early 2011, I retrieved from the UK phone listings Duncan addresses, for any Isle of Bute Duncans and sent letters introducing them to the Donnachaidh DNA Project and the research we are doing, asking for volunteers to participate in the DNA research project.

Figure 2: Leaving Rothesay, Isle of Bute, Scotland on the ferry

I received a reply of interest from Jimmy (James Walter) Duncan of Rothesay about participating.  We completed a Y-DNA test on Jimmy and this summer his results came back as a near perfect match to the men of Duncan Group ‘B’ and the McConnaughey and McConnachie families with the Isle of Bute family story.

This immediately supported a genetic connection between these Duncans and McConnaughey/McConechy groups.  Both of the surname groups in the United States and Ireland have now “jumped the pond” back to Scotland and specifically the Isle of Bute.

Armed with this new and exciting information we set about researching Jimmy’s family history.  Jimmy had complied some of his family history and we were able to pick up with his research and document his Duncan family back into the 1700’s on the Isle of Bute.

We also uncovered where the surname Duncan was being used interchangeably, over a two generational time period, with the surname McConechy during the late 1700’s and early 1800’s. We found in the Church parish records both birth and marriage records of Jimmy’s family where a McConechy also had Duncan written beside his name.

Here is a real life example of the evolving spelling and usage of surnames in Scotland. As stated above, we demonstrated a current Anglicized name (Duncan) evolving out of a root Gaelic name (Donachad) through an intervening Gaelic surname (McConnachie). The validation came by way of our Clan Donnachaidh DNA project which formed to research and investigate the “genetic genealogy” of the men of the affiliated surnames of our Clan.

Additional research has tied Jimmy’s Duncan/McConechy family to one of the McConechy of the 1506 Charter.  We know the location of each of the farms listed for each McConechy from this charter.

We have more work to complete in fleshing out the details regarding the 1506 charter and these McConechy/Duncan.  This research also may have uncovered a migration of some Isle of Bute McConechy’s, that did not take an Anglicized surname, moving north into the Aberdeenshire area of Scotland.  We are trying to find McConnochie families from Northern Scotland to test to investigate this possibility.

Amazingly with documented evidence we are nearly able to say that Jimmy’s family has been on the Isle of Bute from at least 1506 (most probably several generations before)…over 500+ years!

These are some of the interesting aspects of our DNA research that encourages diving into documentary research and learning the local history, which helps us place our ancestors into context.

There are bound to be many more thrilling stories to unfold as we continue this exciting research.  Come along with us on this journey of discovery!